One of the changes I’ve noticed anecdotally over my years in Costa Rica is that the gap between city and country seems to have grown at a dizzying pace. While my husband was raised minutes from where we now live, this fully developed area was pure cafetal during his youth; he spent many childhood days playing outside among the coffee plants, trees and rivers. He has been working since the age of 14 and therefore never took long trips, it was easier and cheaper back then for families to get out of the city limits (which were also much smaller) for a few hours or a night. As a result, when we head to the country, we had not to some foreign place but to the Costa Rica of his youth. He may not know how to deliver a calf, but he is, let’s say, conversant with country living.

I worry about the San José kids of today. Their lives are so different – both from my husband’s childhood (“in the age of yore,” as my six-year-old daughter says) and from their rural peers’. Heightened costs mean that many San José families are less likely than before to explore the country in a meaningful way. Safety concerns mean that most of them don’t play outside alone anymore, a change that sometimes bleeds into not playing much outside, period. Screens – well, we all know about screens.

It’s hard for me to believe that the new generation of urban Costa Rican youth will be as comfortable with the country’s flora and fauna as their predecessors. This has serious consequences for the environment, but also for the mental health of that generation. You don’t have to be a forest bathing devotee to understand that a relationship with nature makes a difference in our lives. Costa Rica is a place that people visit from all over the world to rekindle that relationship, but its city dwellers are increasingly cut off from it.

That’s why I like the efforts to teach us about our urban trees and plants. It’s not a new idea – the B Corps Bioland has been planting and labeling trees for years – but I’m seeing it more often, including in our town, where the Municipality of Curridabat’s Ciudad Dulce and iNaturalist programs are identifying trees and even providing QR codes so you can learn more about the species that make even urban spaces such biodiverse places in Costa Rica. When we saw one the other day, my husband said, “That’s silly – every Tico knows what that plant is.” But I’m pretty sure today’s youth do not. If one out of 1,000 read the sign or scan the code – and if the rest of us are gently reminded that “the environment” is not something far away but the spaces we live in every day – then it’s all worth it. 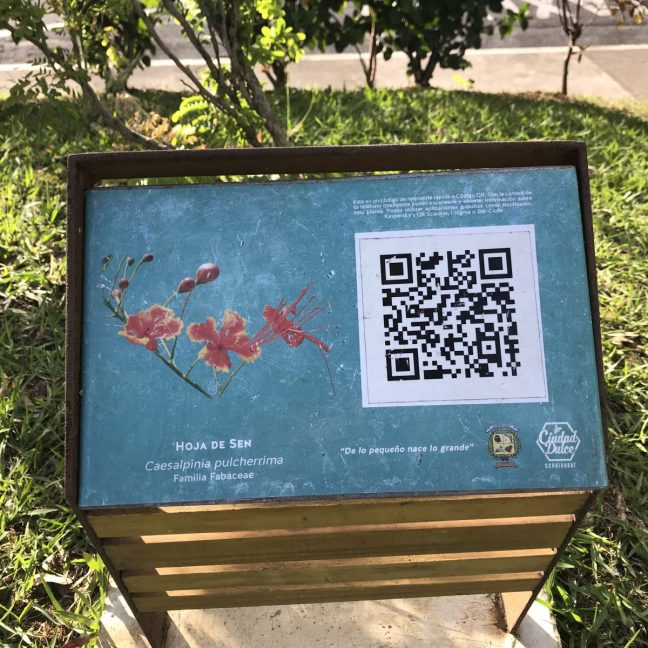 I know that municipalities without the staggering resources of Curridabat, home to some of the country’s richest districts, have other priorities to attend to. So I’m grateful for all those that manage to keep their green spaces on at least their back burner, and for initiatives like Rutas Naturbanas (more on them soon!) that help bridge the gap. Costa Rica’s natural beauty should not be reserved for people with cars, or people with money, or people who live in neighborhoods with resources to lavish on their parks. In fact, the future of those natural resources depends on how well the country makes natural experiences accessible to everyone, the future voters.

Here is what Jessica Sheffield, an incredible Costa Rican leader in environmental education and the creator of the Guardians of Nature Movement, had to say yesterday in La Voz de Guanacaste about women’s leadership at this beyond critical moment in the history of our planet. This translation is excerpted from Jessica’s Facebook page:

Women play an essential role in the conservation of our natural resources. We are leaders with the potential to achieve a critical transformation in the protection of nature, ensuring the well-being of our communities and the planet.

In Costa Rica, a large number of women are leading initiatives that are transforming society. Christiana Figueres promoted the Paris agreement on climate change; Karla Chaves Brenes leads the Latin American recycling program ecoins; Alejandra Monge-Jiménez directs the Corcovado Foundation, which protects the Osa Peninsula, one of the most biodiverse places on the planet; Zdenka Piskulich is the force behind Costa Rica Por Siempre, one of the most consolidated conservation NGOs in the country. There are many other prominent Costa Ricans achieving change through their leadership initiatives.

Our formal education, especially during the early childhood years, is mostly led by women. During my three years directing Guardians of Nature, I have noticed the extraordinary power that teachers have, inspiring and educating a new generation of children, the guardians of our natural resources. Given the necessary tools and resources, teachers will educate present and future generations about the need to live in peace with nature.

Costa Rican women have leadership roles in our homes as well. Even though times have changed, many of us still take care of our children’s food, select products that benefit their health and the environment, and educate the family about the proper use of resources. Above all, we are an essential force and engine in the marketplace with the ability to influence the supply of products and services through our own consumption.

…I am confident that, little by little, there will be many more guardians of nature, women who exert great influence from their homes, jobs and social circles. Thank you to all the girls, moms, and professionals who make this difference every day.

And on that uplifting note, here is a recap of this week’s posts:

Wellness Wednesday: The curse of multitasking.

Travel Thursday: The one thing every visitor to Costa Rica must pack.

Bonus: Over at Poems on Demand, I tried my hand at a sonnet. Shakespeare may be agitating just slightly in his grave, but it was fun. You can see it and my other poems here.

Have a wonderful weekend and wish me luck (more about that on Monday!).