I spend a lot of time thinking about the big changes that need to happen in order for my daughter to inherit a Costa Rica and a world where women are treated better than they are today. Yesterday, I was reminded that sometimes, those changes get made through sheer individual achievement. Doors can be smashed open by, say, one woman who runs like hell.

How improbable is it for a Costa Rican athlete to become the fifth-fastest woman in world? As a friend pointed out after Andrea Carolina Vargas Mena broke her own records to secure her spot among the world’s best at the World Athletics Championships, not to mention becoming the first athlete from her country ever to qualify for an open-area athletics final, you have to take her context into account – and not just the tininess of her country, five million strong. It’s the lack of support, both official and societal, for female athletes. The lack of enthusiasm for any sport aside from soccer. I am reasonably interested in sports and very interested in women’s sports, and had never heard of her until this weekend. Many people here are still unaware, especially since she ran her final at the same time that Saprissa and Alajuela were facing off on the football pitch.

All of this is to say that when Andrea Vargas blazed her way down the track, she overcame not only the limits of her own legs and lungs but also layer upon layer of disinterest, of low expectations, of what have surely been many pulls and distractions and calls to give up and do something considered more sensible or appropriate. She showed us what it means to power through. Without any doubt, she gave new hope and surely attracted new resources to women athletes of all ages in Costa Rica – including women who are mothers, as she is.

Andrea won many hearts in just 12.64. She definitely won mine: 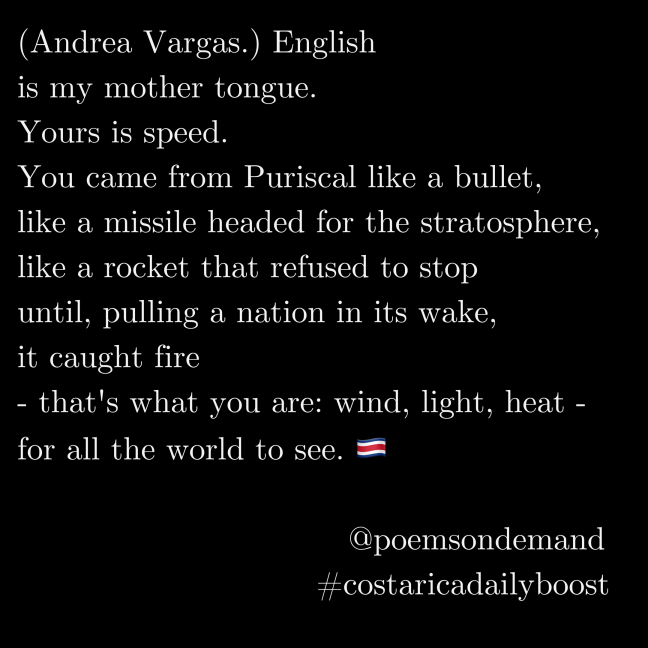