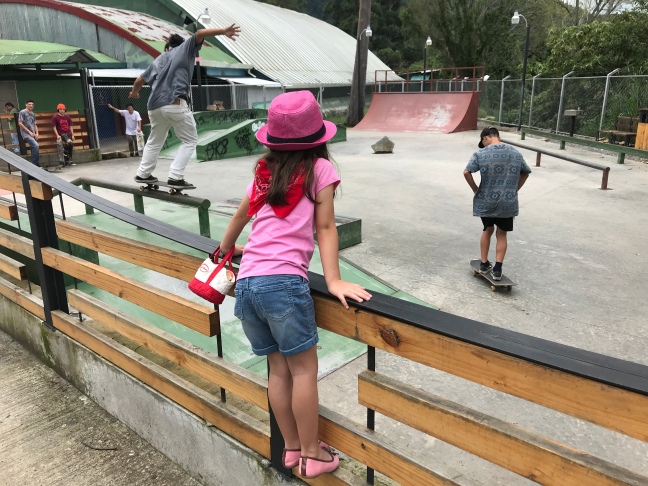 My daughter rolled into that Costa Rican farmer’s market in style. She wore a pink straw fedora she was given for her birthday by a preschool friend, all pink clothes she picked out for the weekend, and a black-and-red spotted Miraculous Ladybug coin purse – well, it’s actually a special case for the supernatural being who provides Miraculous Ladybug’s superhero powers, but it doubled that day as a coin purse. She surfed waves of confidence and shyness, negotiating for corn on the cob that she insisted on fitting into the tiny L.L. Bean bag she had brought for this purpose, rejoicing when she was given a free sample of watermelon, counting out her 100-colon coins in exchange for apples from Los Santos.

For my part, I carried two increasingly heavy bags of fruits and vegetables, and my usual vague cloud of worries. Doesn’t she stand out an awful lot? Is she going to be Costa Rican enough? Have I emphasized English too much (she hears one language from one parent, one from another, and my early months at home from her seem to have given English the edge for now), and will she sound funny as an adult? Does she look too fancy, too girly? Why did I fail so spectacularly at keeping her from drinking the Barbie Kool-Aid?

We finally stopped to rest next to a skate park where boys and men were soaring, falling, sweating and falling some more. My daughter perched on a metal railing and watched them, impressed. After a while, she started shouting some suggestions – in English, for some reason. Calling them “dude,” for some reason. As in “Dude, try leaning forward a little more when you hit the curve!”

I was about to open my mouth and remind her that she’d better use English if she wanted to communicate with them, when suddenly I was struck dumb by an epiphany that came out of nowhere.

Anyone who has ever watched a movie with a teenager in it knows we shouldn’t force our kids to become musical virtuosos, or to get all As, or to act ladylike, or to marry The Right Sort of Person. Before we have kids, or before they are born, or before they have actual personalities, we look at them and say, “We just want her to be happy.” The problem is that we all have ideas about what creates that happiness. We all project our own insufficiences onto these small people we love so fiercely. In my case, I want her to be Kind, and Generous, and Outspoken, a Real Costa Rican, and a Woman Free from Societal Gender Expectations. Those are all admirable aspirations, probably better than wanting her to be the best pianist in the world or a rich lawyer. But they are still burdens I am placing upon her. And those parents who want more traditional forms of success for their kids don’t develop those desires out of nowhere. That’s simply how they are expressing that same desire: I just want her to be happy.

Wouldn’t it be nicer just to set all that down, the way I set down my bags of papayas in that moment and stood, suddenly unencumbered, sweaty and tired, watching a small child dressed entirely in pink lean over the rail and yell encouragement in English at those skaters?

Wouldn’t both of us breathe more freely if I stopped pushing her this way or that, and remembered that, in the end, I’m simply her guide through the fair, and that only she can decide which booths catch her attention and where she’ll spend her precious coins?

Wouldn’t it be nicer if I just enjoyed her pink fedora and her own particular, weird, wonderful way of navigating her path through the world?

I did. That morning, I did. Then we walked back up the hill, my bags the same weight, but my heart suddenly, momentarily light.

One thought on “Day 28: The pink hat and the skate park”