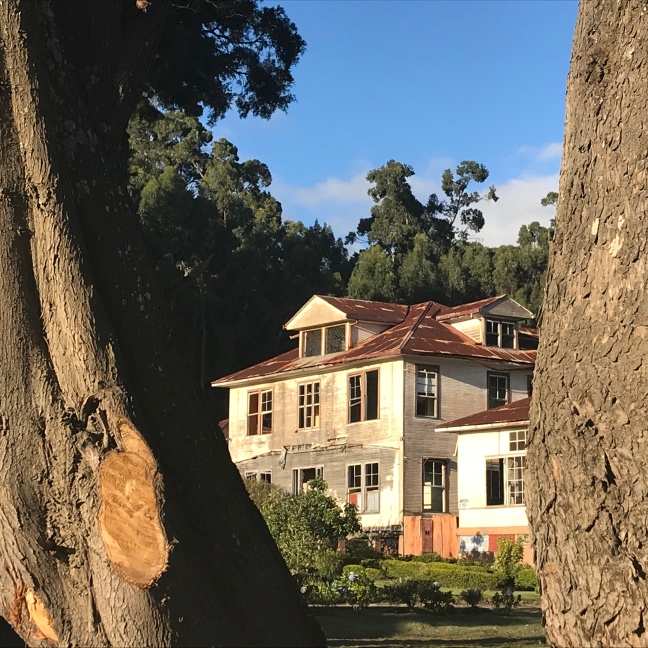 When my daughter was 10 months old, I accepted an invitation from a group of friends to visit Potrero Cerrado, a town on the flanks of the Irazú Volcano. As a part of the trip, we visited the famed Sanatorio Durán. I found the former tuberculosis hospital – which many Costa Ricans believe is haunted by the spirits of patients who died there – to be profoundly creepy. As my friends explored its dark depths, I spent most of the time jiggling my daughter on my hip as we strolled around the garden.

Life’s funny. Seven years later, taking a lonely walk on a road near the Sanatorio in the midst of a global pandemic, I found Costa Rica’s haunted house to be profoundly comforting.

After a busy work week and more than a month without venturing beyond a five-block radius, we decided to take a short drive to find an empty stretch we could walk through. We ended up near Potrero Cerrado and, after only an hour or so scuffing along a dirt road and gazing over quiet fields, we felt more refreshed than we used to after a whole weekend away. It was as if we’d taken a luxurious bath in the fresh, cool air. It makes sense: after all, the air of this particular town was what drew Dr. Carlos Durán Cartín to build his TB center here in the first place, opening its doors in 1918. (Durán was also a founder of Costa Rica’s Hospital Neuropsiquiatrico Chapuí, which I was gratified to learn just now was originally called the Hospicio de Locos: the Hospice for Crazy People. I guess that’s no worse than “insane asylum,” but somehow seems even more direct.)

I’m not sure why it was soothing there today. The open fields, the wind through the cypress trees – all of it must have contributed, but gazing at the crooked shutters and discolored facade of the iconic building was what calmed my spirit most of all. Maybe it was the reminder that life and death and terrible diseases and even pandemics are a part of life on this planet, even if such an event wasn’t a part of most of our lives until right now. Maybe it was the way in which this place where many people died now coexists so calmly with the surrounding forests and farms and cows. Maybe it was the fact that, as I told my daughter, this was a sad place for many people, but it was also a place where many people survived.

Life goes on, the old building seemed to tell me. Not for everyone. Not uniformly. Not fairly. This was a beautiful place where the best possible treatment was meted out. Many, many people died without access to the care they needed, then as now. But the life of the world goes on, and here you are on a sunny day, and that will have to do.

Life goes on, it said. Or maybe those were the spirits at my ear.

I’m a writer in San José, Costa Rica, on a year-long quest to share daily posts on inspiring people, places and ideas from my adopted home as a kind of tonic during a rough time in the world. Sign up (top right of this page) to receive a little dose of inspiration every weekday in your mailbox; tell a friend; check out past posts; and please connect with me on Instagram or Facebook! If you want to learn more about how to support Costa Rica during the crisis, visit my COVID-19 section, updated regularly – or for ways to enjoy Costa Rica from afar, visit Virtual Costa Rica.

2 thoughts on “Life and death, one century on”