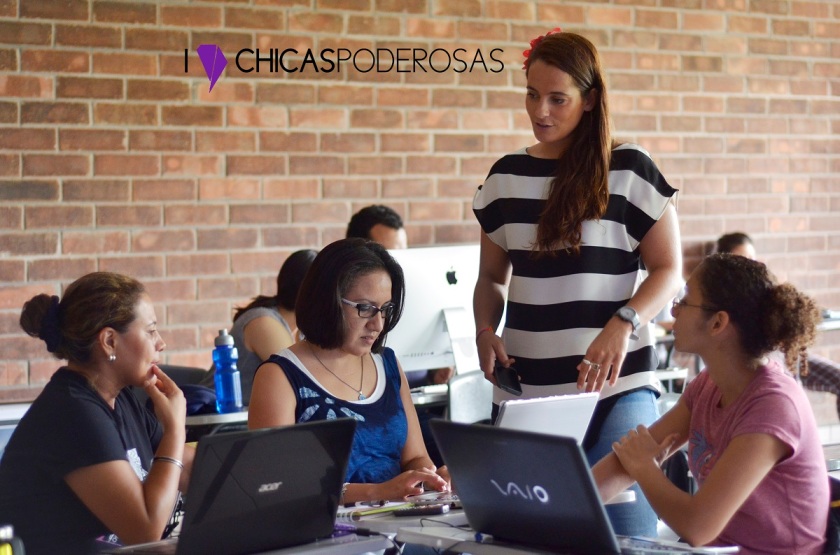 Step one if you want to interview Mariana Santos? Figure out where in the world she is.

And no, following her on Facebook won’t help much. As the driving force between a growing international network of journalists, she’s not only traveling constantly to trainings and events, but also sharing updates, event announcements and most of all, news from all over the world. Oftentimes, it’s groundbreaking digital journalism created by members of Chicas Poderosas (Powerful Girls), an organization she founded in 2013 and now co-directs with Vicki Hammarstedt, the digital media director of the Berkeley Advanced Media Institute.

The organization’s goal is to address the gender gap Santos, 34, experienced during her work in digital media at organizations including The Guardian and Fusion, and to provide women – both professional and citizen journalists – with the tools they need to tell their stories online. From free training and events to the organization’s New Ventures Lab, which offers intensive support to women-led media startups, Chicas is on a mission to get women telling stories using digital tools they might otherwise be uncomfortable using.

While the organization was created with Latin America in mind, its presence in the United States is increasingly strong: in Miami, where Chicas has partnered with Univision, the University of Miami, Florida International University and Fusion; in Los Angeles, where a four-day virtual-reality training is planned for October; and New York, where the organization is just launching now. The organization has trained more than 3,000 people and has big plans for the future.

The Tico Times caught up with Santos – in her native Lisbon, it turned out, at her parents’ house, preparing for a Chicas event in northern Portugal later that week – to discuss the state of journalism, the Trump effect, and the message she wishes every woman would take to heart. Excerpts follow.

You’ve said that in the world of digital journalism, you were often the only woman in the room. How did you go from that observation to launching an international journalism network?

At The Guardian… there were 180 developers and there were only three women there. I thought, there really is this glass ceiling, and so few of us. How can we get a stronger voice together? So when I received the Knight International Journalism Fellowship, they asked me to develop a project where I could teach what I had learned at The Guardian…  I wanted to have more women like me being able to maneuver on the digital level and to get their stories online. I started doing trainings in different countries in Latin America.

The community grew so much that I started to think, “How can I make this go beyond myself? Instead of me having to go to each country, how can I give them the power and ability?” So when I received a fellowship from Stanford, I organized an event there with more than 80 people, of whom 30-plus flew from Latin America, and I designed the best-of my nine months at Stanford in four days, the compressed version of my experience. We went to NASA, we went to the Google campus, learning about the tools; at Stanford we learned about virtual reality. I tried to give access to the widest diversity of concepts and learning.

The girls went back to their own countries, their own communities, and started organizing their own events – this made the events’ number explode.

With Chicas Poderosas, the main goal is to bring more women into technology in newsrooms. There are lots of tech events and they often attract a very small percentage of women in comparison to men. Women, if they don’t have a high level of skill with technology, might say, “Oh, what am I going to do there? I don’t know if I fit.”

What we aim for with the Chicas Poderosas events, we say, this is for us. We fit. We shouldn’t be afraid of technology. Even if we have to start from scratch, we do. The first event was in Chile, Hacks and Hackers – we renamed it Chicas Poderosas, and we had 150% higher attendance.

That makes sense. I would never dream of going to an event called Hacks and Hackers. But “Powerful Girls…”

So men are likely to say, “I don’t have the skills, but I’ll figure it out.”

More men than women have that kind of attitude. This is the chip I always talk about. Let’s change the chip. We are the first ones to block ourselves, to think we are not good enough, to censure ourselves. With Chicas, I would really love to just let go of that. Let’s go do it.

Our events can range from 50 to hundreds of attendees. It’s not just for women; we welcome everybody. It’ a story of equality. It’s a conversation that has to be had with both genders.

Why is that so important for the media?

When we do our content for the digital world, it will hopefully be consumed by all kinds of people. We are talking to women, to trans people, to queer people, to all kinds of people. If we only have one group of people telling the stories, this will be biased towards their point of view: not only gender, but religion and background. If we want to attract a wider audience, we need to have a diversity of voices.

Like it or not, a person can be extremely educated and informed but will also be biased towards the beliefs and education he or she knows. I’ve witnessed this all my life – when we have a wider perspective, our product is much better, because it reaches more people that we are trying to represent.

There’s a very tangible example: you know that when Apple launched their health app, the one with the little hearts? It was meant to track the health of an individual, man or woman. It had all sorts of things, and it didn’t have women’s periods, because it was built by a man. It’s not because the man doesn’t know, but it’s just not in their veins, it’s not something they personally experience. When the project came out, it failed, because it only had men in mind. That’s a tangible example that can be represented in journalism.

And it’s just a waste of talent, because 50% of the voices and points of view are women.

As a U.S. citizen, when I look at what’s happening in my country, one of the areas where I have the most trouble seeing how we can move forward is how we consume news. We’re not consuming the same information, the same facts. How can Chicas play a role in that kind of problem?

Many news organizations and tech companies are coming up systems to help readership to help readers know when it’s fake news. With Chicas, we are starting with seven events in Latin America this year – one of them in Costa Rica – where we want to empower women and men with tools on how to do research, how to do fact-checking, how to make it from head to toe completely impossible to confuse with fake news. We are launching this new program to help women come up with their own news investigations with independent fact-checking so we can make sure that when they post a story, it’s fact-checked, it’s real, and it’s irrefutable.

Has the political climate in the U.S. accelerated your work somewhat?

Well, I quit my job… so I’d say yes. I’m now focusing on Chicas Poderosas full-time because I really want to empower more women. I quit my job in June 2016, and when I saw what happened in November, I really said, let’s do this for Chicas. I’m working on a full plan.

I noticed Chicas put out a statement about the future of the organization on January 20, Inauguration Day.

Yes. We need to stand up and do something. In the coming weeks I’m going to do a Facebook Live about all the planning we’ve been working on since November, and making the Chicas Poderosas aware about where we’re going, what we’re gonna do and how they can be part of it.

You know, I actually sometimes think, thank you [Donald] Trump for this wakeup call. Not only with women, but the entire community. People have gathered together and you see them challenging power: in Tweets, live, on TV when a lot of people are watching the same source of information. It’s a wakeup call, I think, for the people not only of the U.S. but of the world.

What’s your message for women – journalists who might be afraid to get into digital, or women who are not journalists who, with everything that’s happening in the world, might be thinking, “I want to get my voice out there”?

Don’t be the one clipping your own wings. Allow yourself to change your own chips. Talk to us and let’s try to get you at an event near you so you can see you have more power than you think.

See also: Why despair in the age of Trump means we need to know more, not less

Are you changing the way you consume media, or starting to tell your story in new ways? I’d love to hear about it. Contact me on Facebook or Twitter.