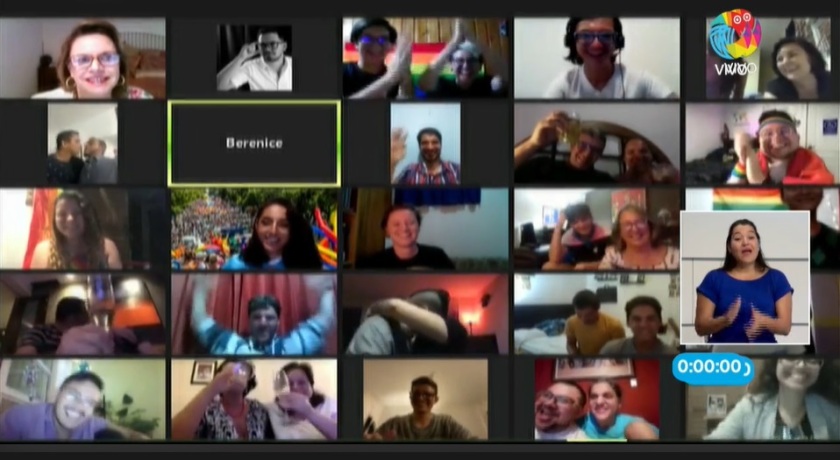 Every action has an equal and opposite reaction. The arrival of marriage equality in Costa Rica will provoke pushback from the many people who oppose it. So while, on the one hand, it is a shame that the mass celebrations that were being planned for the big moment – last night, at midnight – it also felt like a blessing that this historic moment took place in privacy. No protests, no demonstrations. Each of us was free to connect with the people for whom this meant most; watch their joy in the distant, yet strangely personal online setting that has framed so many of our interactions during this pandemic; and marvel in our own way.

To paraphrase a certain Book, we treasured all these things, pondering them in our hearts.

The major networks, public television and Sí, Acepto Costa Rica joined forces for a special broadcast that counted down to midnight (if you missed it, it is worth checking it out). In this way, it was like a New Year’s broadcast, but it felt more like Christmas because of the quiet, and the waiting. So much waiting. It is overwhelming to see all the faces: face after face of couples who have waited to marry, activists who have waited to see the fruits of their labor, allies who have walked with them along the way. All the marches, all the legal battles, all the bureaucracy, all the suffering. Several people mentioned all those who were no longer with us. They waited until their time ran out. The weight of what was owed to them, and never paid, was almost palpable. It was their pressure, however private or personal, against the closet door, their pressure against hatred and rage, their pressure on behalf of love that finally broke through with the force of millions.

So many of the struggles that preceded last night’s celebration were private, silent, lonely. It seemed right, somehow, that we marked this occasion from our homes. It seems almost miraculous that people who have been denied their rights and been excluded for so long were able to open a computer in the middle of the night, connect to thousands of others, and see that situation change before their very eyes. Maybe I’ve been spending too much time reading the Harry Potter series to my daughter, but it felt like a magic portal. I guess that’s what the law can do.

As it was before the first Christmas, some people are afraid. They will be heard, I know. But for this one moment, it was pure joy. Even through a grainy Zoom call, each participant a tiny square on the computer screen, you could see the exhaustion and release of the moment on many a face. Faces of the waiting that was finally rewarded.

“The people who will enjoy these rights are not strangers. They are our daughters and sons,” said President Carlos Alvarado in a video message. “All they want is space for the respect and dignity that every human being deserves.”

Congratulations Alexandra and Daritza, the first couple to be (publicly, at least) married after the clock struck midnight. As your wedding gift, I wish with all my might that the president’s words will come true: “May empathy and love be the compass that allows us to make it through.”

I’m a writer in San José, Costa Rica, on a year-long quest to share daily posts on inspiring people, places and ideas from my adopted home as a kind of tonic during a rough time in the world. Sign up (top right of this page) to receive a little dose of inspiration every weekday in your mailbox; tell a friend; check out past posts; and please connect with me on Instagram or Facebook! If you want to learn more about how to support Costa Rica during the crisis, visit my COVID-19 section, updated regularly – or for ways to enjoy Costa Rica from afar, visit Virtual Costa Rica.