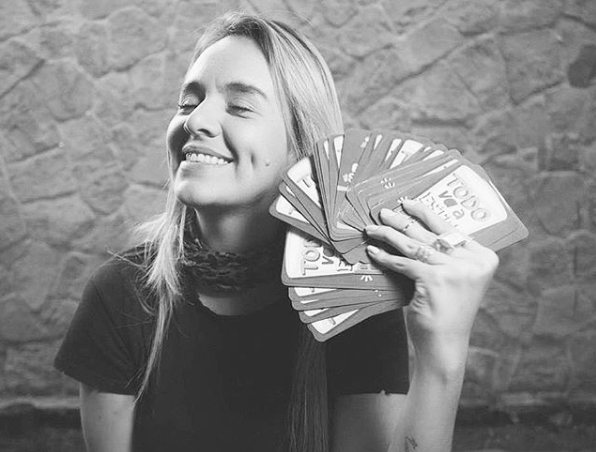 I met Cris Gomar for the first time earlier this year to discuss a potential journalism project. She is literally dedicating her life to creating safe spaces for people to open up, so it’s probably no surprise that we quickly fell into one of the most honest and vulnerable conversations I’ve ever had, all in the middle of a crowded coffee shop. I was fascinated to learn about the mental health initiative Cris had started, Vaso Lleno – more on that on a minute – and the inspiring way in which she, by being honest about her own mental health challenges, was opening the floodgates for people in Costa Rica to ask for help or simply tell a painful story they’ve kept secret for years.

I told her how much I would like to cover and engage in her work through the media organization I was leading at the time. After we finished our long conversation and said goodbye, I stayed behind at the table to do some work. An older woman who had been sitting at the next table and whose group was getting up to leave came over and touched my arm.

“Don’t forget about the men of Los Santos,” the woman said quietly, referring to a coffee-growing region in the mountains to the east. “The suicide rates are very high there. They need a way to share their stories, too.”

I tell you this to illustrate how urgently the work of Vaso Lleno, Cris’s mental health initative, is needed in Costa Rica, a country where a variety of cultural factors often lead people to hide their struggles. I’ve learned from Cris and other advocates that some of those factors include the lighthearted, “pura vida” good humor that makes people assume their fears or pain might not be taken seriously. Machismo, which makes many men feel that there’s something wrong with them if they feel bad. A widespread assumption that if you do need to talk to someone, that someone should be your priest – which, especially for women and the LGBTQ community, moves an awful lot of topics off the table.

Enter Cris. Through Vaso Lleno, she is sharing stories of anxiety, depression and other challenges from her own life and the lives of the people who, in her growing online community, are opening up about the problems both big and small that have made their lives more difficult. She was inspired to do this work after experiencing a debilitating anxiety attack and learning first-hand what can happen when we push our mental health problems out of sight. Vaso Lleno means “full glass,” and she says she chose the name because your glass is always full – even if there are bad experiences in it, you can transform them. It began as a thesis project in 2010 and is now a vibrant social outreach initiative.

She creates anonymous surveys where people can simply tell their stories – and to which Costa Ricans respond in astonishing waves that show the extent of the problem. In November, she launched a survey just for men, and from her updates, it seems that she received an epic response. She organizes support groups and other in-person experiences. She shares posts both hilarious and heartbreaking that illustrate what anxiety looks like. She gives speeches that spark massive responses from people who are so relieved to feel that maybe they aren’t so alone after all – like this one, where she also talks about what it’s like to be a tall woman in Costa Rica. (Yes, this is another reason I could relate to her so quickly.)

Now, Cris has created Vasoterapia, a pack of conversation starters. I haven’t gotten my hands on one yet, but from the looks of them, they are a mix of funny and deep, just like Cris herself. She says they are great for kids, families, couples, friends, any group – and the people are already contacting her to let her know how much fun they had and how they learned surprising new things about the people in their lives. (I’d venture to say that this would probably be a great gift for a Spanish teacher in your life.) My main reason for picking them up is that I’m more and more convinced every day that Vaso Lleno is filling an urgent need in this country and world, and I want to support it in any way I can.

I’m hoping to do a deep dive into wellness in Costa Rica in January, so you will be hearing more about Cris and mental health soon. Until then, if you’re a Spanish speaker, I invite you to follow her on Facebook or Instagram (as I write this, it looks like the way to acquire Vasoterapia is by simply messaging Cris there). One thing’s for sure – there is much more to come from this rising leader.